Could Green Energy transitions be hindered due to the Ukraine War

You are here: Home1 / News2 / Could Green Energy transitions be hindered due to the Ukraine War

Green energy targets set for countries to reach by 2030 may be impacted by the current global crisis. Cop26 climate summit held in November 2021 in Glasgow set out energy targets for each governing body who have pledged to achieve net-zero. The summit witnessed agreements to reduce deforestation, methane emissions, and coal production, with at least 23 countries making commitments to phase out coal power.

197 countries decided on an agreement to draw down fossil fuel subsidies despite the argument that broke out over whether coal should be ‘phased down’ or ‘phased out’. The direction was finalised as COP26 president Alok Sharma said “The end of coal is in sight”.

Only four months on since this agreement at COP26, the global energy situation has taken a huge turn in the opposite direction, with coal and oil levels reaching an all-time high in Europe this winter, resulting in increased emissions and green energy installations fell below the levels needed to reach climate change targets. The increasing numbers occurred prior to the Ukraine war however, this global crisis has forced Europe to cut ties with Russian oil and gas suppliers and reconsider timelines of commitment to reducing reliance on fossil fuel. 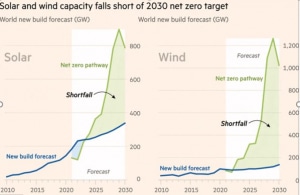 European leaders are urging countries to accelerate the transition to renewables in response to the global crisis in Ukraine. A meeting is to occur to discuss a push on green energy installations in response to the war. Economist Dieter Helm says ‘we are determined to limit Putin’s capacity to finance his atrocious war’

According to the International Energy Agency in order to achieve the net-zero pathway coal use must reduce by half this decade in order to stay on track. However, the conflict means that global cooperation on climate change must include huge emitter such as China and Russia which will become more difficult.

It is evident that countries are slowly drifting further and further away from the net-zero goals set out at COP26. There needs to be big changes set in place by governing bodies in order to achieve their ambitious targets.