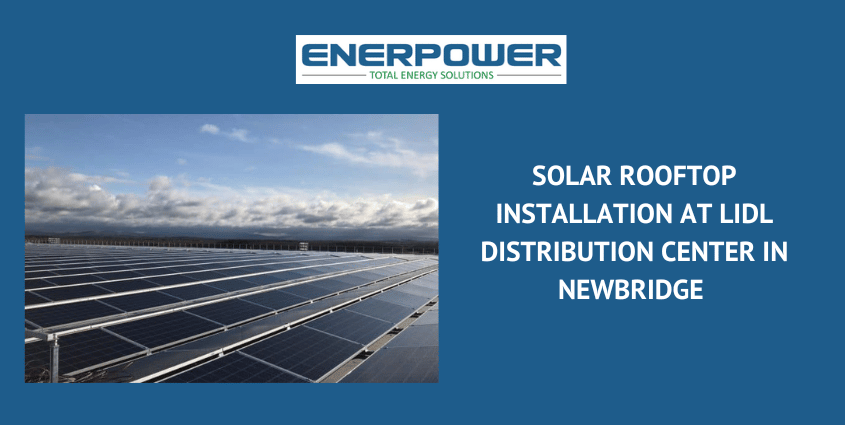 Take a look back at what was Ireland’s largest solar rooftop installation.

Lidl Distribution Centre in Newbridge was Ireland’s largest solar rooftop installation in the country, generating over 1,011,929 kilowatt-hours of energy from the renewable energy installation. The 1 million euro investment from Lidl opened opportunities for Enerpower to design and install a 1.2MW solar rooftop system at the Newbridge facility. Approximately 4,364 solar panels were installed at the site, reducing the facility’s carbon footprint by 473 tonnes of CO2 annually, the electricity usage is equivalent to that of 240 homes.

Speaking about the solar installation project, Dr John Carty, Enerpower’s Director of Projects says; “We are delighted to be working with Lidl to deliver Ireland’s largest ever Solar PV project. Solar energy has become one of the cheapest sources of electricity generation and Lidl are setting an example for businesses in this country, demonstrating that they can reduce their carbon emissions while also making significant savings on energy costs and future carbon taxes.”

Since this installation Lidl has continued their commitment to its sustainability programme with the installation of rooftop solar PV across the store network. Enerpower continues to carry out 150kW solar installations for both new builds and retrofits.

Enerpower are delighted to help Lidl achieve their sustainability targets and looks forward to continuing the partnership with Lidl.

How can solar energy help combat climate change.
Scroll to top
We use cookies to ensure that we give you the best experience on our website. If you continue to use this site we will assume that you are happy with it.Ok