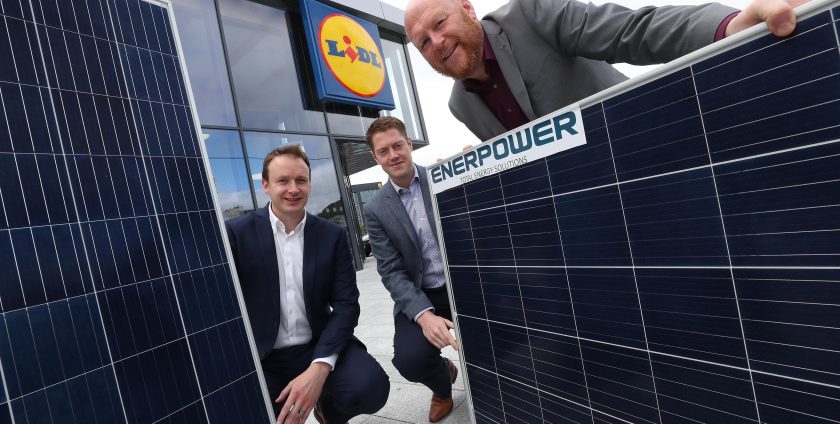 • 4364 solar panels will be installed on the roof of the Lidl distribution facility currently under construction in Newbridge, Co. Kildare

• Lidl’s solar panels will reduce the facility’s carbon output by 473 tonnes annually, the electricity usage equivalent to that of 240 homes

Lidl has welcomed a grant of planning from Kildare County Council for the installation of energy-saving solar panels at its 58,000m2 distribution centre in Newbridge, Co. Kildare, which is currently under construction. This installation will see an investment of €1m at this site alone, adding to the €1m already committed by Lidl to solar power installations across its store network.

Once installed, the solar panels at the Lidl distribution facility will produce 1,011,929 kilowatt hours of energy from a sustainable resource annually which is equivalent to meeting the electricity requirements of 240 homes and reduces the centre’s carbon output by some 473 tonnes annually. As a result of this investment over one quarter of Lidl’s energy requirements will now be generated by solar power. Lidl will work with Waterford based Enerpower, who will supply the 4364 individual panels, which will be installed on the roof of the distribution facility – making this Ireland’s largest ever installation of PV solar panels.

The distribution centre is being built to the highest environmental standards and will be certified to BREEAM, the world’s leading sustainable building certification. This latest investment is part of a range of sustainability initiatives introduced by Lidl in recent months. In addition to the solar installations Lidl became the first Irish retailer to roll out recycling bins across its entire store network to allow customers recycle unwanted packaging and has also committed to installing the largest network of electric vehicle charging points in the Irish supermarket sector. Lidl was also the first retailer to be ISO50001 accredited across its entire operations. ISO50001 is an European energy management standard credited to businesses who are committed to continually reducing energy output. In conjunction with their extensive investment in on-site renewable solar energy, Lidl also switched to sourcing 100% of its electricity requirements from renewable energy last year.

Alan Barry, Director of Property & Central Services for Lidl said: “Lidl is rooted in communities throughout Ireland and we pride ourselves on operating in a way that is sustainable with the least impact possible on the environment. We were very clear when building our largest distribution centre that we would integrate the latest sustainability innovations that will generate ongoing energy savings. The installation of solar panels at our distribution facility in Newbridge will generate over 25% of the building’s energy requirements, reducing our carbon output by some 473 tonnes annually. This facility is a major part of our distribution network and will allow us to continue to expand, offering shoppers more and more quality products at the lowest prices. The facility will include a wide range of sustainability features including electric cars and charging points, LED lighting, natural refrigerants, heat recovery technology as well as a wide array of biodiversity elements such as a wildflower meadow, beehives, bat boxes and insect hotels to promote pollination, all surrounded by an extensive native woodland.”

Speaking about the solar installation project, Dr John Carty, Enerpower’s Director of Projects says; “We are delighted to be working with Lidl to deliver Ireland’s largest ever Solar PV project. Solar energy has become one of the cheapest sources of electricity generation and Lidl are setting an example for businesses in this country, demonstrating that they can reduce their carbon emissions while also making significant savings on energy costs and future carbon taxes.”

• Visit http://www.abettertomorrow-lidl.ie/ for a full overview of Lidl’s ‘A Better Tomorrow’ CSR programme
• Lidl is a member of the Bord Bia Origin Green Programme. Origin Green is a sustainable Development programme, developed for the Irish food industry. To become a member of the programme, Lidl has committed to a five-year sustainable development plan with numerous targets that Lidl reports on each year.
• In 2017, Lidl achieved ISO50001 certification across all stores. Lidl has an ambitious strategy aimed at reducing carbon emissions, minimising energy consumption and improving sustainability. The ISO 50001 standard is a globally recognised energy management system developed to continually improve the energy performance of buildings, optimise their use and reduce their operating costs.
• Lidl’s new concept stores are built using a range of strategies to reduce environmental impact. These include:
o High performance glass fronted façade to maximise natural daylight entering the building
o Sensor controlled exterior sun blinds to reduce unwanted heat from the sun
o Waste heat recovery ventilation systems and LED lighting
o High insulation with external cladding
o Lighting sensors to conserve energy where it is not required
o Lidl also provides the Lidl office-based team with electric carpooling vehicles for business trips. 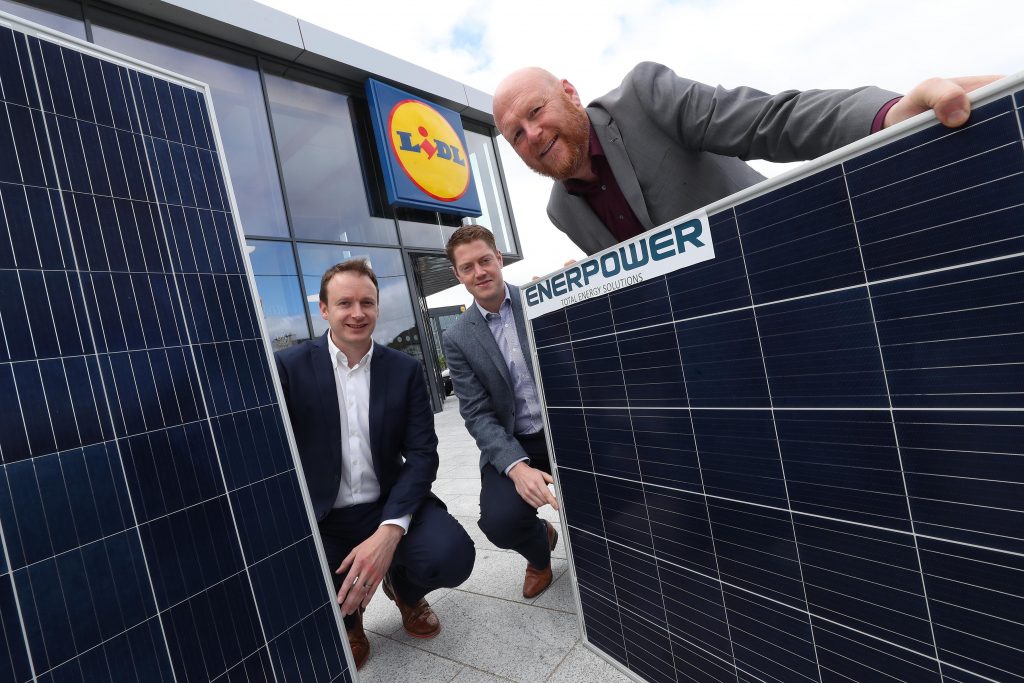 Dr John Carty (left) and Owen Power (right) from Enerpower pictured with and Alan Barry, director of property & central services for Lidl as Lidl and Enerpower team up to install the largest amount of solar panels in Ireland at the retailers new distribution facility in Newbridge, Co. Kildare. Pic. Robbie Reynolds